It is one of the first portable typewriters. And how fitting because it is an extremely well-traveled typewriter. A globe-trotter. It’s lived in: London, Uganda, Kenya, Sierra Leone, Singapore, Oxford and now New York City. (Like me.) It was my mother’s and she gave it to me recently.

The Olivetti Lettera 32 was designed by Marcello Nizzoli in 1963. His first iteration is in museum collections. The design is a classic.

Wonderfully, the Lettera 32 was popular among writers including: Cormac McCarthy (this identical model); Sylvia Plath; James Purdy; John Updike. Francis Ford Coppola used an Olivetti Lettera 32 to write the screenplay for The Godfather, which he also directed.

Also here is the original manual I still have for it: 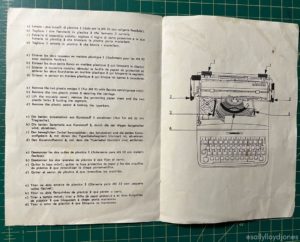 But it hadn’t been used for 40 years so I took it to Gramercy Typewriter to be reconditioned. They told me the typeface is unusually beautiful. Because it has serifs. (Those typefaces that have extra strokes at the end of their letterforms—they “evoke feelings of history, tradition, honesty, integrity” one expert said.)

I can touch type but a mechanical typewriter is a whole different story. Jay at Gramercy Typewriter gave me an hour’s tutorial—pointing out that every single thing on the typewriter is there for a reason. Nothing is wasted. It has great economy. And beauty. Which is, of course, a hallmark of all great design. Form and function working together.

He told me to leave the machine out so I can see it—because it’s beautiful. He also explained how the touch on the keyboard is essential—not too light, not too heavy. Just right. (Which then immediately reminded me of Goldilocks. But of course I didn’t say that.) And then he told me to go off and practice.

So I’m going to do just that—by typing out my favourite quotes. And sharing them with you in a series called: “Typed on my Olivetti Lettera 32.”

So there you have it. This first quote. It’s from Mark Twain. And it officially launches my new series #typedonanolivettielettera32. With more to follow on Instagram. ALSO more about Gramercy Typewriter. It’s family owned and operated—since 1932. It survived the pandemic. It’s also where Tom Hanks gets his typewriters. He collects them as you probably know. (Especially if you’ve seen the film California Typewriter.) They are pals. So I feel now that I too must also be pals with Tom Hanks. I wonder if he has as nice an Olivetti Lettera 32 as I do?

Here she is again, in her original case. (Excuse me, but what about that colour?) And a sneak peek of quote number two coming soon: What quotes should I type next? Leave your suggestions in the comments. And I’ll type them up!

PS: Interested in other favourite writing tools? See my favourites.

3 Responses to “Typed on an Olivetti Lettera 32”